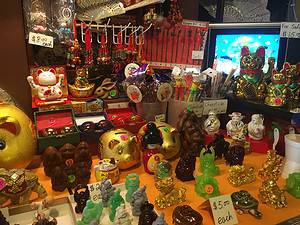 We recently visited the hidden gem that is Golden Bowl, located at 309 Bel Air Blvd Mobile, Alabama, 36606. Restaurants that are hidden gems are one of our favorite finds, especially when we’re hungry. Golden Bowl is a hiding in plain sight in Mobile, Alabama just across from Bel Air Mall. Compared to all of the other Chinese buffets in town, and arguably across the entire state, Golden Bowl has them beat. This fine Asian restaurant serves Cantonese, Hunan, Thai, Japanese (yes, there’s sushi on the cold bar), and Szechuan. This is genuine Chinese food when you order from the menu. And we haven’t ever had Chinese food this good outside of Chinatown. 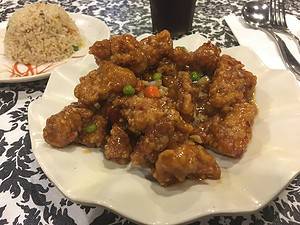 The outside of Golden Bowl is markedly deceptive: It’s in a building that’s been around forever that was a Chinese restaurant 20 years ago when Bel Air Mall was the biggest deal around — long before Amazon had ever been conceptualized. When you walk past the golden lions and enter the front door, you will find yourself inside a very interesting Chinese gift shop filled with lucky cats, real bamboo, jade Buddha statues, and stress balls. Very shortly after, you should be greeted and brought into the main dining room where you can have a regular table or Hibachi any time of the day.

Once you’re seated (and if you’re new to Golden Bowl) one of the employees may give you a very thorough walkthrough of the menu. You should also be alerted that there’s a hot and cold bar that includes ice cream when you’re done with your meal. If you’re doing take-out, the hot and cold bar isn’t available, so there’s a perk to dining-in. There’s a large variety of different items that you’d expect from a Chinese restaurant such as Pepper Steak, Moo Goo Gai Pan, Sweet & Sour Chicken, and everyone’s favorite General Tso’s Chicken. 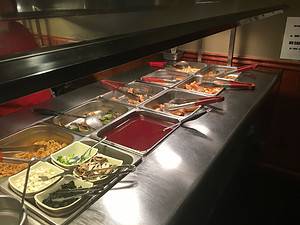 Most of these full entrees, plus the hot and cold bar, are available for $9.95. This also includes white or fried rice. Lunch is just $6.95 during the week and $7.55 on the weekend. That’s honestly a steal considering what a large Whopper Value Meal at Burger King costs. Hibachi starts at a modest $6.95 at lunch and $8.50 for dinner.

You’d think that with prices this cheap that the quality of food is going to be poor, but you’re very wrong if you do. Golden Bowl serves extremely fresh food that’s made to order. If you’ve put off Chinese food in Mobile, AL since you’ve gotten burned by China Chef or Golden Dragon, Golden Bowl is the best place to go in, arguably, the entire state and Gulf Coast.

Don’t forget to like Golden Bowl on Facebook or check in to “Thai Fountain” since they have a Pokemon Go PokeStop at their location! Golden Bowl also has an amazing new website at http://goldenbowlmobile.com. Enjoy!

Why do you need a web hosting service?
Scroll to top