Blog
You are here: Home1 / Blog2 / Marketing3 / Reviews4 / Review: How to Measure Return on Investment in Social Media

One of the absolute best SEO/SMO articles we’ve read in a very long time:

Consider how much you are aware of your presence online once you see the graphs.  We were amazed at the figures, but not shockingly surprised. We tweeted about this very topic last week in an online discussion and are proud to share it with you here. Great job Brian Solis on a very powerful and well needed article!

ROI: How to Measure Return on Investment in Social Media

What follows is the entire version of my recent post on Mashable, “The Maturation of Social Media ROI“

Over the years, Social Media experts attempted to redefine ROI for a new era of influence. While some introduced alternative philosophies for measuring the nuances tied to social media, others wondered aloud whether ROI simply wasn’t necessary as the tools and methodologies for analyzing yields didn’t yet exist. And furthermore, by focusing on justification and metrics, we were distracted from the primary objective of building relationships and cultivating dialogue.

The debate over ROI inspired certain brands to cannonball into popular social networks to join the proverbial conversation without a plan or strategic objectives defined. At the same time, the lack of ROI standards and established authorities unnerved many executives, preventing any form of experimentation until their questions and concerns were addressed.

But that was then and this is now.

In 2010, we enter into a new era of social media marketing, one based on information, rationalization, and resolve.

Business leaders simply need clarity in a time of abundant options and scarcity of experience and answers. As many of us can attest, we report to executives who have no desire to measure intangible credos rooted in transparency and authenticity. In the end, they simply want to calculate the return on investment and associate Social Media programs with real world business performance metrics.

Over the years, we explored ideas, driven by a passionate desire to find new meaning and vindication in uncharted domains. These discussions and the innovation they sparked, redefined the framework for traditional metrics, creating hybrids that would and will prove critical to modernizing business practices, improving products and services, and effectively competing for the future.

ROI: The Return on Ignorance

Where the “I” in ROI represents return on investment, marketers have also explored ancillary elements to address the socialization of media, marketing, and the resulting dynamics of engagement.

Return on engagement – the duration of time spent either in conversation or interacting with social objects, and in turn, what transpired that’s worthy of measurement.

Return on participation – the metric tied to measuring and valuing the time spent participating in social media through conversations or the creation of, social objects.

Return on involvement – similar to participation, marketers explored touchpoints for documenting states of interaction and tying metrics and potential return of each.

Return on attention – In the attention economy, we assess the means to seize attention, hold it and as such measure the responses activities that we engender.

Return on trust – A variant on measuring customer loyalty and the likelihood for referrals, a trust barometer establishes the state of trust earned in social media engagement and the prospect of generating advocacy and how it impacts future business.

But as we learn through experience, our views and techniques mature into more sophisticated strategies as we progress through the Ten Stages of Social Media Evolution.

For many businesses, the case for new metrics cannot arise until we have an intrinsic understanding of how social media engagement affects us at every level. To be quite honest, it is not as simple as counting an increase of subscribers, followers, fans, conversation volume, reach, and traffic. While the size of the corporate social graph is a reflection of our participation behavior, it is not symbolic of brand stature, resonance, loyalty, advocacy, nor is it an indicator for business performance.

Sometimes we simply need ROI to signify a meaningful return on investment.

In 2010, Social Media endeavors are still funded as pilot programs to steer the brand towards perceived relevance in the hopes that they demonstrate momentum and as such, rewards materialize. Budgets are for the most part, borrowed from other divisions to fund the teams and programs lead by the internal champions who effectively make the case for experimentation. Where that money goes and from where it’s borrowed varies by department and by company usually tied to where champions reside internally today.

In many cases however, new programs are introduced without an integrated strategy. Money is allocated from existing programs, and if we’re going to take it away from something, we should therefore determine whether or not we’re justified in doing so.

According to a 2009 study performed by Mzinga and Babson Executive Education, 84 percent of professionals representing a variety of industries reported that they do not measure ROI.

In 2010, executives are demanding scrutiny, evaluation, and interpretation. Even though new media is transforming organizations from the inside out, what is constant nevertheless, is the need to apply performance indicators to our work.

The Business of Social Media

The CFO, CEO, and CMO of any organization would be remiss if they did not account for spending and resource allocation, regardless of the allure and seduction of social media.

MarketingProfs recently published a study performed by Bazaarvoice and the CMO Club that revealed the true expectation of chief marketing officers. Bottom line, they want measurable results from social media. 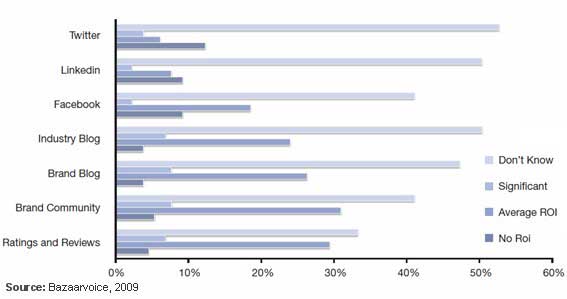 Elusiveness continues to prevail however. The study found that the exact impact of social media tactics evade the grasp of CMOs.

More specifically however, roughly 15% believe there is no ROI associated with Twitter and just over 10% cannot glean ROI from LinkedIn or Facebook.

I believe this is the direct result of not tying activity to an end game, the ability to know what it is we want to measure before we engage. Doing so, allows us to define a strategy and a tactical plan to support activity that helps us reach our goals and objectives.

What is it we want to change, improve, accomplish, incite, etc.?

Doing so will allow us to establish goals and objectives that specifically tie activity to:

– Links (the currency of the social web)

– Reduction in costs and processes

Among the responses received from CMOs, customer ratings and reviews rose to the top of marketing activities that deliver tangible ROI insight. In 2009, 80% of respondents reported that customer stories and product suggestions shape products and services. As a result, brands earn the trust and loyalty of their customers for listening and responding – as long as they are made aware of their role and rewarded for it.

In 2010, CMOs will review opportunities for user-generated content sources to involve customers and advocates with many reporting…

– a 59% increase in the use of customer ratings and reviews

The Socialization of Monetization

Social media metrics will increasingly tie to revenue in 2010. To what extent seems to vary according to CMOs.

In 2009, those companies that aligned social media investments with revenue estimate:

Companies such as Dell are not only tracking the impact of Social Media on revenue, but expanding lessons learned across the entire organization. According to Dell’s Lionel Menchaca:

Our @DellOutlet is now close to 1.5 million followers on Twitter, and back in June we indicated that @DellOutlet earned $3 million in revenue from Twitter. Today it’s not just Dell Outlet having success connecting with customers on Twitter. In total, Dell’s global reach on Twitter has resulted in more than $6.5 million in revenue. In fact our Brazilian and Canadian accounts are growing rapidly too – and it was Canadian tweeters who asked to make sure Dell Canada came online to Twitter. Dell Canada responded because the team heard our customers. In less than a year, @DellnoBrasil has already generated nearly $800,000 in product revenues. Similarly, @DellHomeSalesCA has surpassed $150,000 and is increasing at notable pace.

The Forecast for Metrics in 2010

Earlier we mentioned generic forms of Social Media metrics. The survey revealed that indeed, many CMOs, 89%, tracked the impact of social media by traffic, pageviews, and the size of their social graph or communities. However, 2010 is the year that social media graduates from experimentation to strategic implementation with direct ties to specific measurable performance indicators.

In 2010, CMOs will seek to establish a connection between social media and P&L business goals. The study documents the adoption of three metrics:

A Call To Action

Among the most effective forms of any marketing initiative is the integration of a call to action. It is how I define influence as it gives us the ability to inspire activity and measure it – as designed. As stated earlier, revenue is only one form of metrics we can introduce, but defining the “R” in ROI is where we need to focus as it relates to our business goals and performance indicators specifically. Even though much of social media is free, we do know the cost of engagement as it relates to employees, time, equipment, and opportunity cost (what they’re not focusing on or accomplishing while engaging in social media). Tying those costs to the results will reveal a formula for assessing the “I” as investment.

When we truly grasp the ability to define action and measure it, we can expand the impact of new media beyond the P&L. We can adapt business processes, inspire ingenuity, and more effectively compete for the future. 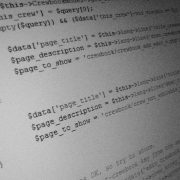 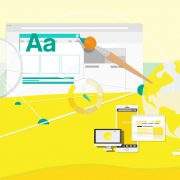 Where Should SEO Start?

Everything You Need to Know About Meta Descriptions